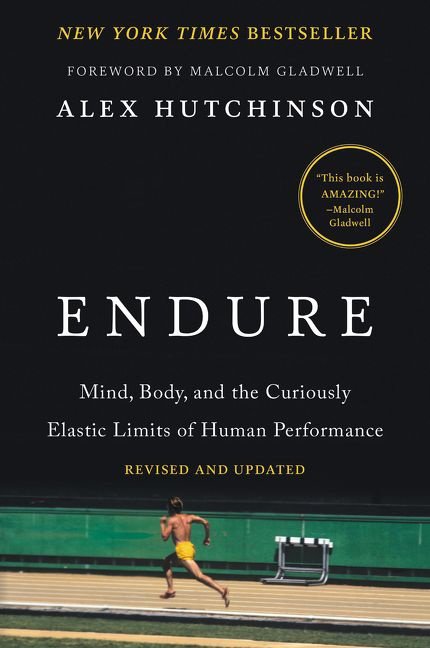 REVISED EDITION  Updated with the latest research and a new afterword

Limits are an illusion: discover the revolutionary account of the science and psychology of endurance, revealing the secrets of reaching the hidden extra potential within us all.

"A voyage to the outer reaches of hu...

REVISED EDITION  Updated with the latest research and a new afterword

Limits are an illusion: discover the revolutionary account of the science and psychology of endurance, revealing the secrets of reaching the hidden extra potential within us all.

"A voyage to the outer reaches of human capacity. David Epstein, author of Range

"Reveals how we can all surpass our perceived physical limits." Adam Grant

The capacity to endure is the key trait that underlies great performance in virtually every field. But what if we all can go farther, push harder, and achieve more than we think were capable of?

Blending cutting-edge science and gripping storytelling in the spirit of Malcolm Gladwellwho contributes the books forewordaward-winning journalist Alex Hutchinson reveals that a wave of paradigm-altering research over the past decade suggests the seemingly physical barriers you encounter as set as much by your brain as by your body. This means the mind is the new frontier of enduranceand that the horizons of performance are much more elastic than we once thought.

But, of course, its not all in your head. For each of the physical limits that Hutchinson explorespain, muscle, oxygen, heat, thirst, fuelhe carefully disentangles the delicate interplay of mind and body by telling the riveting stories of men and women whove pushed their own limits in extraordinary ways.

The longtime Sweat Science columnist for Outside and Runners World, Hutchinson, a former national-team long-distance runner and Cambridge-trained physicist, was one of only two reporters granted access to Nikes top-secret training project to break the two-hour marathon barrier, an extreme quest he traces throughout the book. But the lessons he draws from shadowing elite athletes and from traveling to high-tech labs around the world are surprisingly universal. Endurance, Hutchinson writes, is the struggle to continue against a mounting desire to stopand were always capable of pushing a little farther.

This book is AMAZING! - MALCOLM GLADWELL

Makes the case that were actually underestimating our potential, and reveals how we can all surpass our perceived physical limits. - Adam Grant, LinkedIn.com

If you want to gain insight into the mind of great athletes, adventurers, and peak performers then prepare to be enthralled by Alex Hutchinsons Endure. - Bear Grylls, Mt. Everest summiteer and host of NBCs Running Wild with Bear Grylls

Fascinating (and motivating). ... Hutchinson sheds light on how humans accomplish our most absurd athletic achievements. - Esquire

A perfect book for the armchair athlete. ... If you ever wonder, How do they do that? Hutchinson has the answers. ... Discovers that what we think of as our limits are set by our minds, not by our bodies. - Success (AHA! Reading List)

Alex Hutchinsons Endure is so much more than a sports book. It is a voyage to the outer reaches of human capacity. - DAVID EPSTEIN, author of Range and The Sports Gene

Hutchinson looks at the art and science of endurance, with a focus on running but with take-aways that can be applied to any project, mental or physical. - Globe and Mail (Toronto)

[Hutchinson] has a true gift for writing compelling sports stories and combining them with deft analyses of cutting-edge research. ... A captivating and often moving book with something to offer readers interested in health, athleticism, neuroscience, and the human condition. - Kirkus (*starred review*)

Persuasive and motivating. ... Transports readers to a realm where psychology, environment, and physiology all intersect. - Booklist (*starred review*)

Want to achieve more? Often that means you have to do more -- and Alex will show you how. - Inc.

Were all intrigued by amazing feats of human endurance, from Everest to marathon world records to global Ironman competitions. How do they do it? Alex Hutchinsons Endure explores the topic from every conceivable angle. An essential read for every endurance athlete. - AMBY BURFOOT, 1968 Boston Marathon winner, Runners World writer-at-large, and editor of Runners World Complete Book of Running

Carefully researched and based on the most current ideas in the science of running, Alex Hutchinsons Endure is written with a fluency that makes it easily accessible for all runners. This is an excellent resource for anyone seeking to better to understand how our minds influence our ultimate performances. - TIM NOAKES, emeritus professor of exercise science at the University of Cape Town

The best popular science book on human performance Ive ever read. - Mark Burnley, Ph.D., School of Sport and Exercise Sciences at the University of Kent

Examines how we can push beyond our limits. ... Gives a gripping insight into the mind of great athletes, adventurers and peak performers to find out what gives them the capacity to push harder and achieve more. - The Independent (Ireland)

Endure is a pure science book that goes deep, especially into the mind, and the pacing and story-telling are top notch. - Runners World

Cinematic. ... Thrilling. ... Hutchinson excels at making the science cohere around his central question: what limits us, our body or our mind? - Canadian Running

A fascinating exploration of the limits of the human bodyand, to a large extent, the human mind. .... A must-read. ... Highly relevant for those looking to better understand and improve their performance off the playing field, too.  - BRAD STULBERG and STEVE MAGNESS, authors of Peak Performance

So good. Smart, inspiring, and just fun to read. Makes me wanna be a better runner (and faster reader). - GRETCHEN REYNOLDS, New York Times Well columnist and author of The First 20 Minutes